The Four Humors: An Ancient Take on Phlebotomy 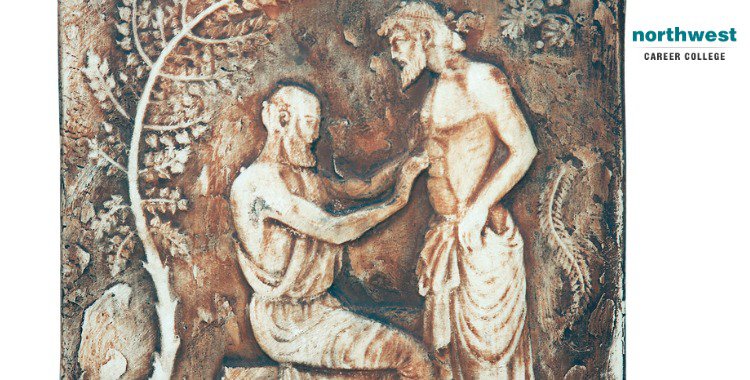 For most of us, the concept of using blood to test for illness seems like a relatively recent idea. However, phlebotomy, or more accurately, bloodletting for medical purposes has been a traditional part of medicine dating back to around 3000 years ago and was only discredited as a medical treatment as late as the late 19th century.

In this article, we’ll be looking at how the ancient world approached blood-based medicine and how their understanding of it eventually informed the modern science of phlebotomy.

Bloodletting was a common medical procedure amongst some of the earliest civilized cultures, such as the ancient Egyptians and Chinese. However, it use was bound up in local traditions of magic and religious practices.

Bloodletting was generally used as a way of removing bad spirits or curses from the blood of the victim, without a relevant understanding of how the circulatory system works or why there might be positive benefits to bleeding a sick person.

Hippocrates and the Humors

The Ancient Greek physician Hippocrates, from where to Hippocratic Oath gets its name, is credited to be amongst the first to make inroads on understanding the paradigm of disease, around 2300 years ago.

Hippocrates believed that existence was represented by the four basic elements—earth, air, fire, and water. In humans, there four elements were related to the four basic humors: blood, phlegm, black bile, yellow bile.

In turn, the four humors were related to a particular organ, the brain, lung, spleen, and gall bladder, and the balanced of a person’s humors was related to their type of personality, making a person more sanguine, phlegmatic, melancholic, or choleric.

Being ill meant having an imbalance of the four humors and treatment consisted of removing an amount of the excessive humor by various means, including bloodletting.

One of the most prolific and important doctors of the ancient world, Galen, who wrote around 200 years after Hippocrates, was the first to map the human circulatory system and declared blood as the most dominant humor.

His medical work, amounting to more than two million words, was used as a guide by doctors as late as the Middle Ages.

Dr. Pierre Louis and the End of Bloodletting

Bloodletting continued to be an accepted medical practice up until the mid 18th century when Dr. Pierre Louis examined the clinical course and outcomes of 77 patients with acute pneumonia, including those treated with bloodletting in the early phase versus the late phase of the illness, taken from his own and local hospital records.

He concluded that bloodletting “was actually much less effective than has been commonly be­lieved.” Such was Dr. Louis’ reputation among the medical professionals at the time, that bloodletting began to fall out of favor.

Subsequent studies by Pasteur, Koch, Virchow, and others that showed that bloodletting could have a negative effect on patient prognosis saw the practice mostly abandoned over the next decade.

As barbaric as it seems to us now, bloodletting still has it place in modern medicine as a treatment for certain specific conditions.

Phlebotomy therapy, as it is now known, is used to treat a few conditions such as hemochromatosis, and over-accumulation of iron in the blood;  polycythemia vera, which causes an abnormal overproduction of red blood cells; and porphyria cutanea tarda, in which a patient struggles to metabolize iron.

At Northwest Career College, we pride ourselves on providing one of the premier Phlebotomy Schools in Las Vegas. Our phlebotomy students have an 89% national exam pass rate and you can graduate in as little as three months.

Our established seasoned instructors will take you through every aspect of Phlebotomy and Northwest offers day, afternoon and night classes to accommodate your busy Las Vegas work and family schedule. Call us today at (702) 403-1592 to speak to one of our admissions specialists about your new Phlebotomy career.