Leeches Are Making a Comeback in Phlebotomy 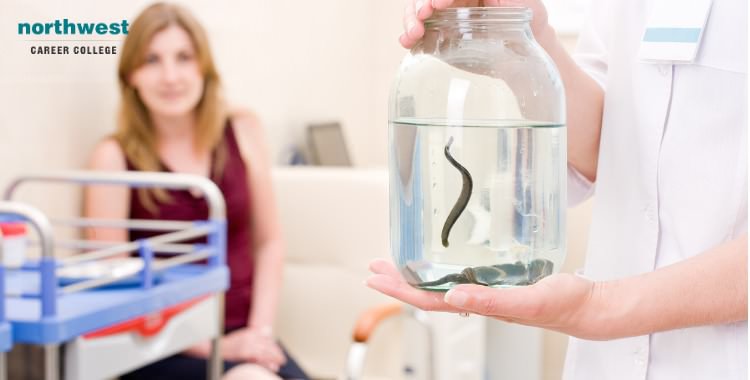 You don’t get much more of a medival image than a doctor applying leeches to the patient to cure some sort of ailment. While it might seem like we’ve moved past the time when we needed segmented parasitic or predatory worms to solve medical issues, Studies started cropping up as early as 2001 promoting the benefits of using leeches in the treatment of osteoarthritis of the knee.

In this article, we’ll be looking at why we used leeches in the first place and why they are making a comeback now.

Bloodletting is the withdrawal of blood from a patient to prevent or cure illness and disease.

Bloodletting, whether by a physician or by leeches, was based on an ancient system of medicine in which blood and other bodily fluids were regarded as “humours” that had to remain in proper balance to maintain health.

It is claimed to have been the most common medical practice performed by surgeons from antiquity until the late 19th century, a span of almost 2,000 years.

A number of different methods were employed. The most common was phlebotomy, or venesection, often called “breathing a vein, in which blood was drawn from one or more of the larger external veins, such as those in the forearm or neck.

Leeches could also be used. The withdrawal of so much blood as to induce syncope (fainting) was considered beneficial, and many sessions would only end when the patient began to swoon.

Why Did People Use Bloodletting?

The original idea of bloodletting was piornnerd by the Greek physician Galen. There were two key concepts in his system of bloodletting. The first was that blood was created and then used up; it did not circulate, and so it could “stagnate” in the extremities.

The second was that humoral balance was the basis of illness or health, the four humours being blood, phlegm, black bile, and yellow bile, relating to the four Greek classical elements of air, water, earth, and fire respectively.

In the middle ages, bloodletting was used to treat almost every disease. iIn 1838, a lecturer at the Royal College of Physicians would still state that “blood-letting is a remedy which, when judiciously employed, it is hardly possible to estimate too highly

So Why Are Leeches Making a Comeback?

If segmented parasitic or predatory worms aren’t really your thing, don’t panic, it’s unlikely you’ll be seeing them the next time you visit the doctors.

Leeches have the same blood-thinning properties in their saliva as those found in manufactured medicines, like Aspirin and Coumadin, but without their allergy concerns. This means that blood thinners made from leeches are often used to treat patients allergic to other medications.

There are also some studies that suggest that leeches can be beneficial in assisting the body in draining blood from surgically reattached limbs.